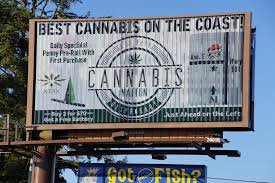 A California judge ruled this week that state marijuana regulators have 30 days to inform businesses of a new ban on billboard advertising.

But the billboard ban hasn’t really been enforced, according to CalCoastNews, which prompted Garrett to issue a follow-up ruling Monday giving the state Bureau of Cannabis Control (BCC) 30 days to tell the companies it oversees that any marijuana billboards must be removed.

The judge ordered the BCC to report back to him within 75 days.

On Nov. 20, Judge Garrett ruled that marijuana billboards on California’s interstate highways are prohibited under Proposition 64, a voter initiative approved in 2016. Garrett then left it up to SLO-based attorneys Saro Rizzo and Stew Jenkins to work out an agreed judgement with the state to remedy the issue.

On Monday, Judge Garrett ordered the California Bureau of Cannabis Control to report back to the court within 75 days.

In 2019, the bureau determined that a 15-mile radius was a necessary and appropriate distance from California borders claiming it satisfied the intent of Proposition 64. That interpretation led to cannabis billboards sprouting up along highways from San Diego to Crescent City.

Matthew Farmer, a SLO County resident and father, filed a lawsuit challenging the state’s interpretation in an attempt to protect children and the public from involuntarily exposure to cannabis advertising along those major highways, His attorneys’ Rizzo and Jenkins then successfully battled the bureau and its interpretation of Proposition 64.